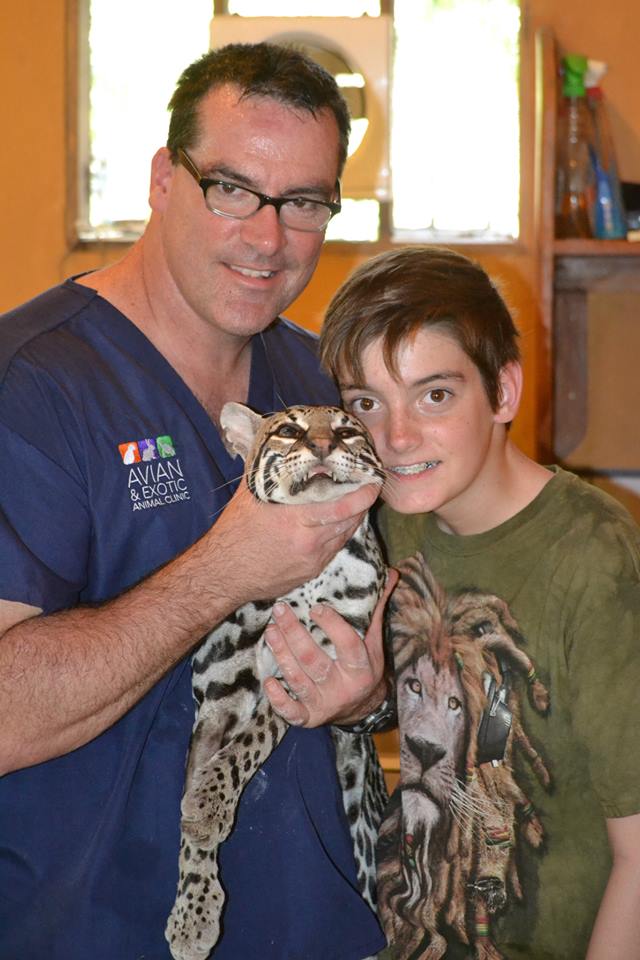 Dr. Todd Eric Driggers grew up in a rural Indiana town, where loving animals through providing medical care became his passion. He started by caring for his pet dogs and cats as a boy, and progressed to exotic pets, such as his pet turtle named Tippy. Dr. Driggers was admitted to the Purdue University School of Veterinary Medicine after just two years of undergraduate study at Purdue, due to his commitment to the profession, demonstrated by his volunteerism and job at a small animal hospital in Indiana. Science, biology, and eventually medicine have been combined in his career as a practitioner of exotic animal medicine and surgery.

After graduating, he began working exclusively with exotic animals at the Avian And Exotic Animal Clinic in Indianapolis, and eventually moved to Arizona, where he started an exotic practice at Mesa Veterinary Hospital. He started a mobile practice called “Foothills Mobile Exotic DVM” in 1997 and changed the hospital name to “The Avian and Exotic Animal Clinic of Arizona” after moving into a small clinic.

Dr. Driggers vacations in exotic locations around the world to view and learn about the wildlife he treats at the office. He is involved in many other activities outside work, including medical coordination for medical mission trips to the Dominican Republic through Food for the Hungry and child sponsorship advocacy. Dr. Driggers is a busy father of three and husband to his high school girlfriend, Heather. He and his family attend church at Central Christian Church in Gilbert. 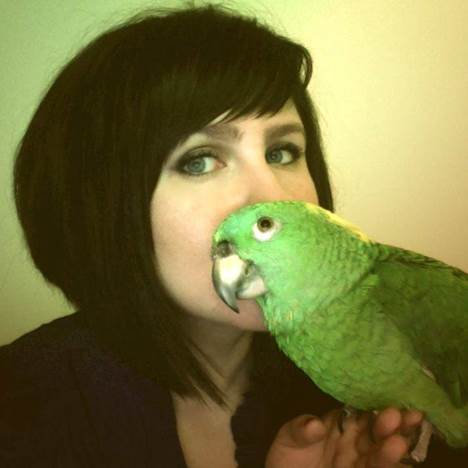 Dr. Sarah McLaughlin joined AEAC after graduating from North Carolina State University College of Veterinary Medicine in May of 2015. Prior to veterinary school, Dr. McLaughlin earned a Bachelor of Science from Northern Arizona University in 2008. Her professional interests include avian medicine, exotic animal dentistry, and ophthalmology. In her spare time, she enjoys traveling, drawing, and taking care of her two Yellow-naped Amazon parrots and two cats. 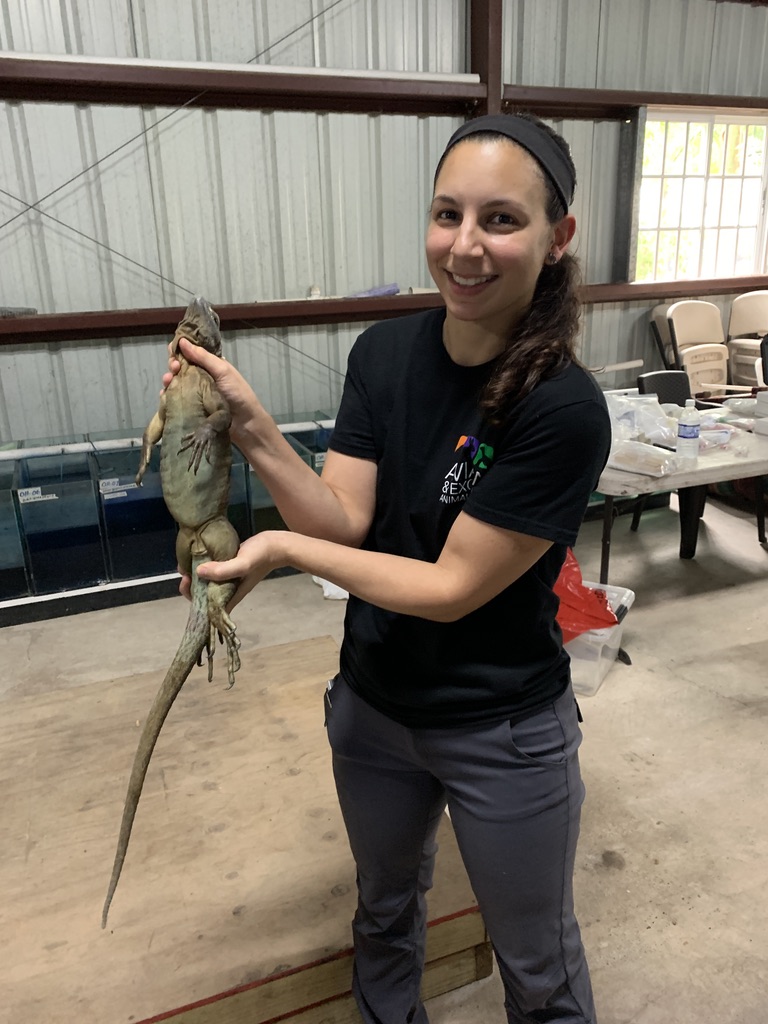 Dr. Alyssa Scagnelli moved to Arizona and joined the AEAC in 2017. She attended veterinary school at the University of Missouri and graduated with her DVM in 2015. After graduation, she completed two academic internships at the Louisiana State University (LSU) School of Veterinary Medicine. Her last year at LSU was entirely devoted to companion exotic, native wildlife and zoo/aquarium medicine and surgery. Dr. Scagnelli is extremely passionate about reptile medicine and conservation. She is an active member of the International Iguana Foundation, an organization that conducts health assessments and creates species survival plans for the world’s most endangered lizards. Dr. Scagnelli is also passionate about aquatic animal medicine and has conducted research on anesthesia methods in fish. She has published several peer-reviewed journal articles and book chapters on various topics relating to exotic animal medicine. While it may seem like Dr. Scagnelli only enjoys "scaly" critters, she loves all aspects of companion exotic medicine. Other areas of interest include backyard poultry and waterfowl medicine, raptor medicine, and avian orthopedic surgery and endoscopy. When she is not at the clinic, Dr. Scagnelli tries to spend her time outdoors or traveling, when possible. She can be found hiking, backpacking, rock climbing, kayaking, SCUBA diving, or simply gardening in the yard. She lives with her fiancé Mark, and numerous scaled, feathered, and furry critters. 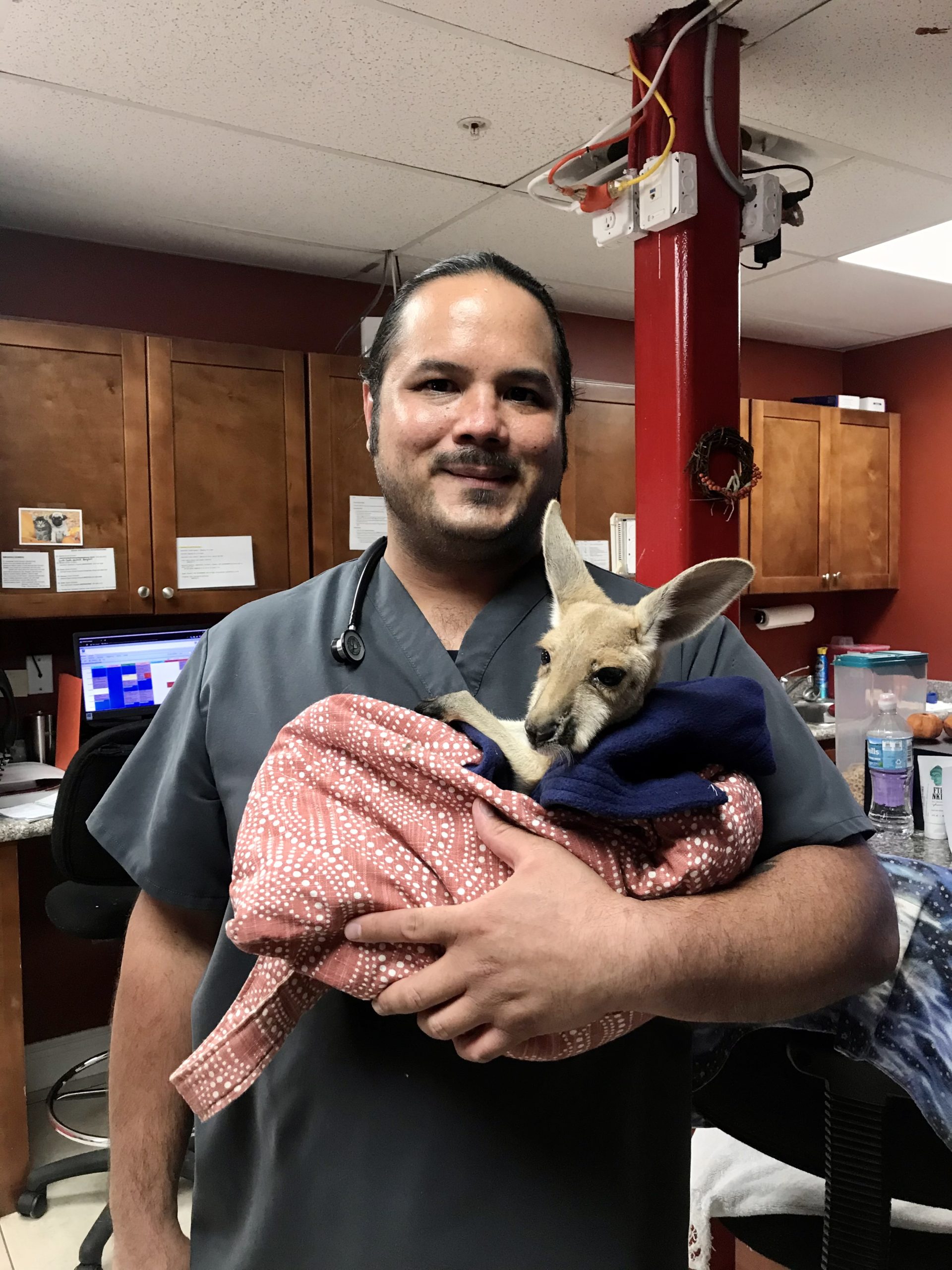 Dr. Ryan Navarro is the newest veterinarian to join the AEAC family after completing a one year specialty internship with Broward Avian and Exotic Animal Hospital located in Deerfield Beach, FL. Prior to this, he earned both DVM and Master’s degrees from Ross University School of Veterinary Medicine in 2018 and 2016, respectively.

Dr. Navarro loves his work treating exotic animals and thrives on the variety of species he gets to interact with everyday. Professionally he enjoys all aspects of exotic veterinary medicine and has particular interests in wildlife conservation and infectious disease, having published several papers on gastrointestinal viral infections in several species from the Caribbean.

When not busy treating his patients, Dr. Navarro enjoys spending time outdoors. Kayaking, hiking, SCUBA diving, and snorkeling are among his favorite activities, in addition to “two wheel therapy sessions” with his Triumph Speedmaster. He lives with his fiancé Krystal, two budgies named Hanalei and Molokai, and three cats named Dr. Ana Taco, Professor Cheddar Cheese Pizza, and Merlin Lord of the Fleas. 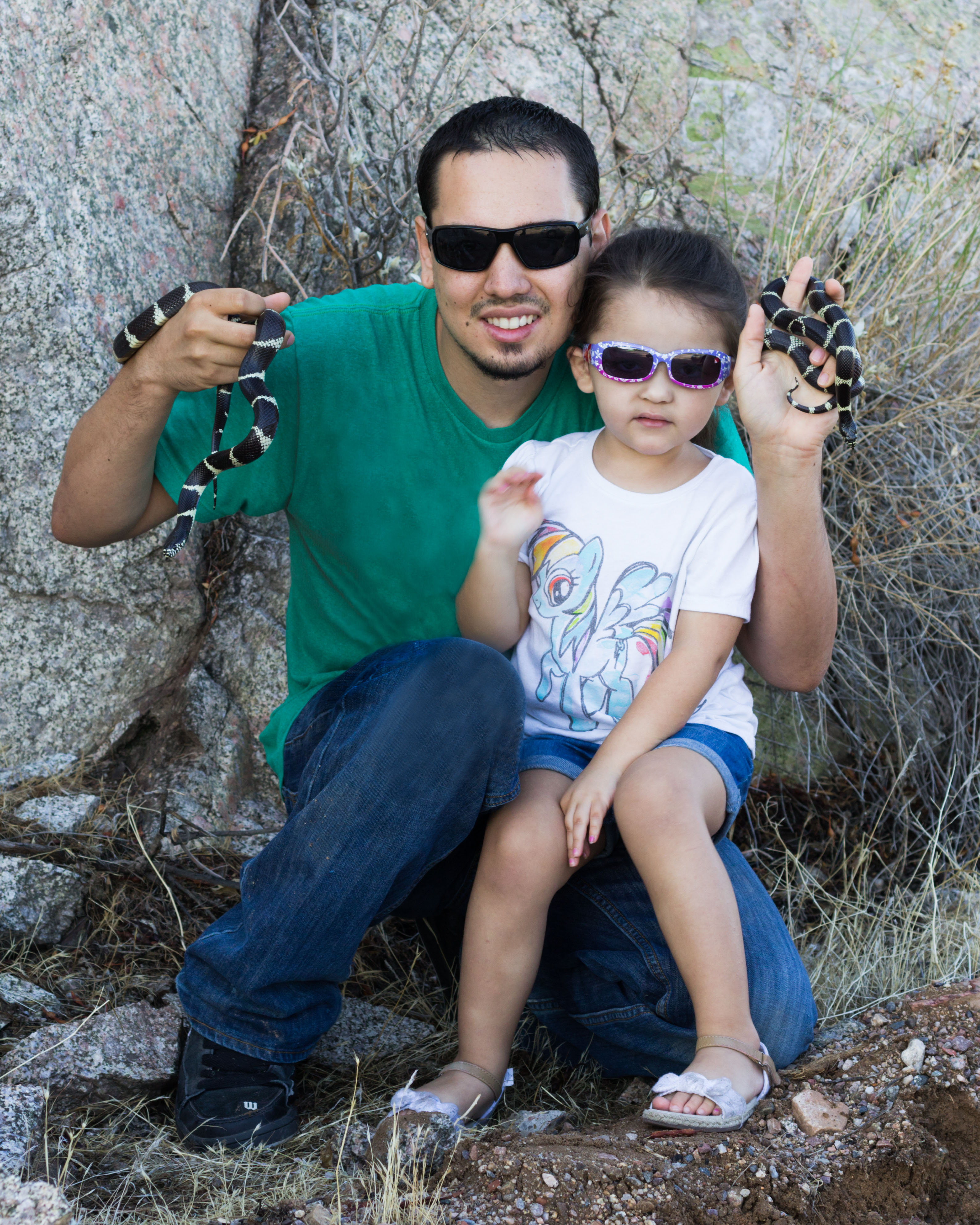 Tim has had a lifelong passion for a wide variety of animals. From a very young age, he has had many reptiles and invertabrates that he has kept and bred. He has been a Veterinary Technician for ten years, and has contributed to many entomological studies involving scorpions, tarantulas, and many other small arachnids such as mites and pseudoscorpions. In his freetime, he likes to shoot portrait photography and spend time with his wife Andrea and 5 year old daughter Zoey, going camping, hiking, and looking for reptiles and bugs to photograph. 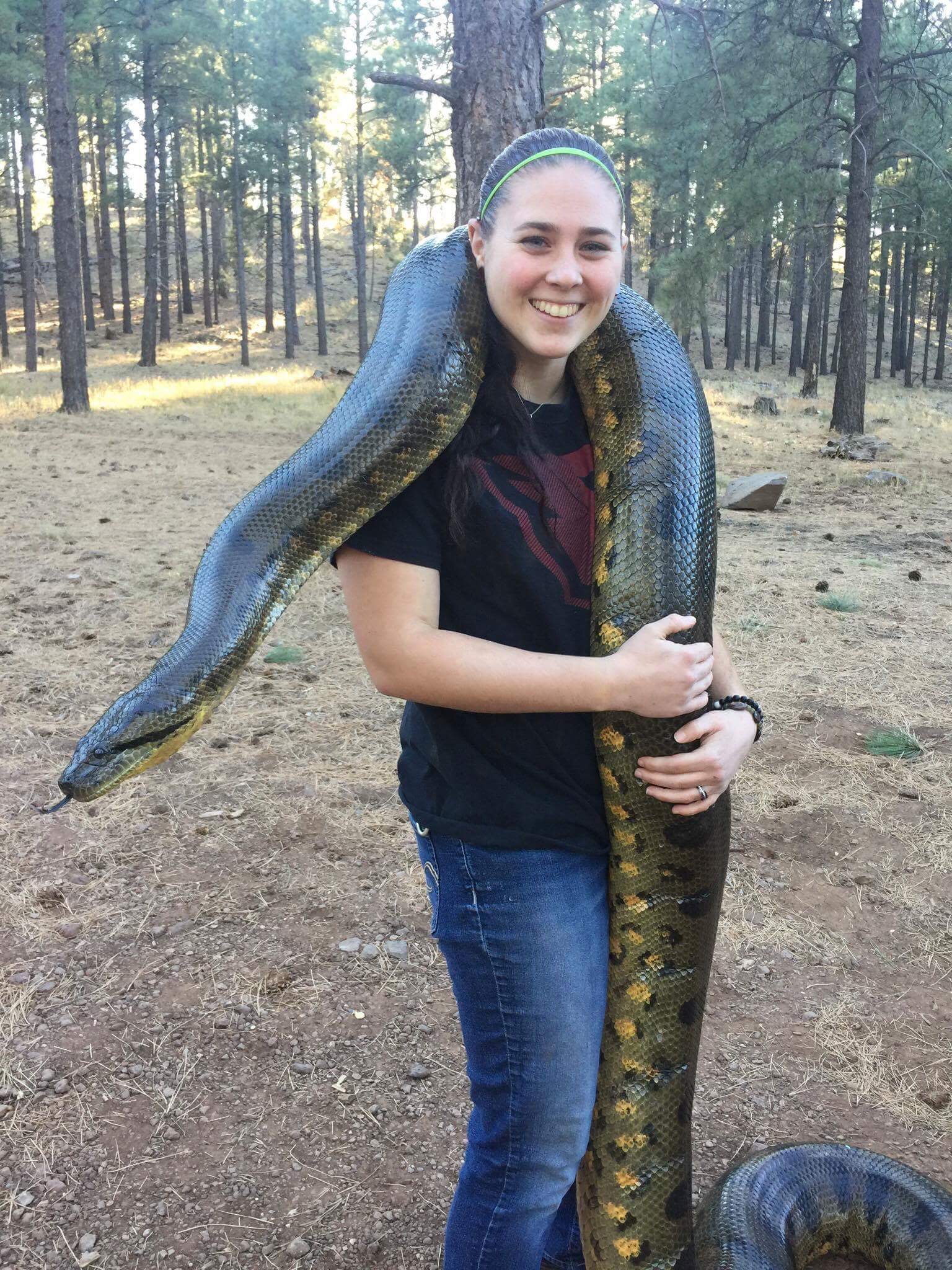 Samantha was born and raised in Gilbert, Arizona, graduated from Perry High School, and received an athletic scholarship to play goalkeeper for Northern Arizona University’s Women's Soccer Team where she studied biology and herpetology. She has always had a passion for animals, especially reptiles, and ever since she was little, Samantha and her dad would go hiking looking for wildlife, especially native rattlesnakes. Ever since then she has wanted to work with exotics and wanted to be in the veterinary field. At 22 years-old, Samantha just recently bought her first house last October in Maricopa, Arizona. Samantha spends much of her time outside of AEAC working with green anacondas, Argentine boas, caiman lizards, and native rattlesnakes primarily. In addition to this variety of reptiles, she does share her home with several other critters as well including her dog Baily whom she raised from 5 weeks old. Samantha's “free” time is spent working with socializing Wolf dogs and educating the public regarding these amazing animals. 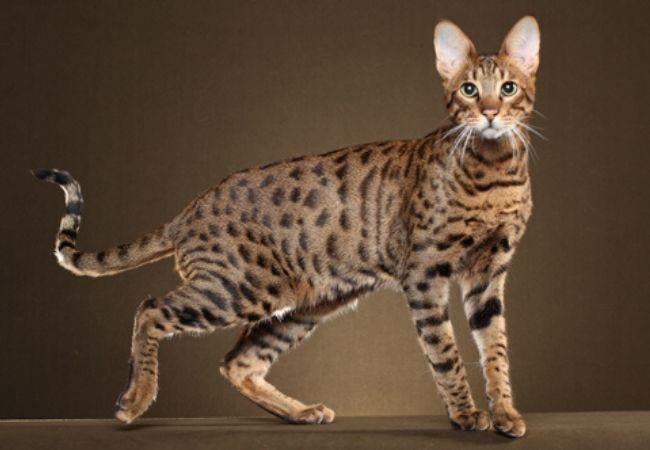 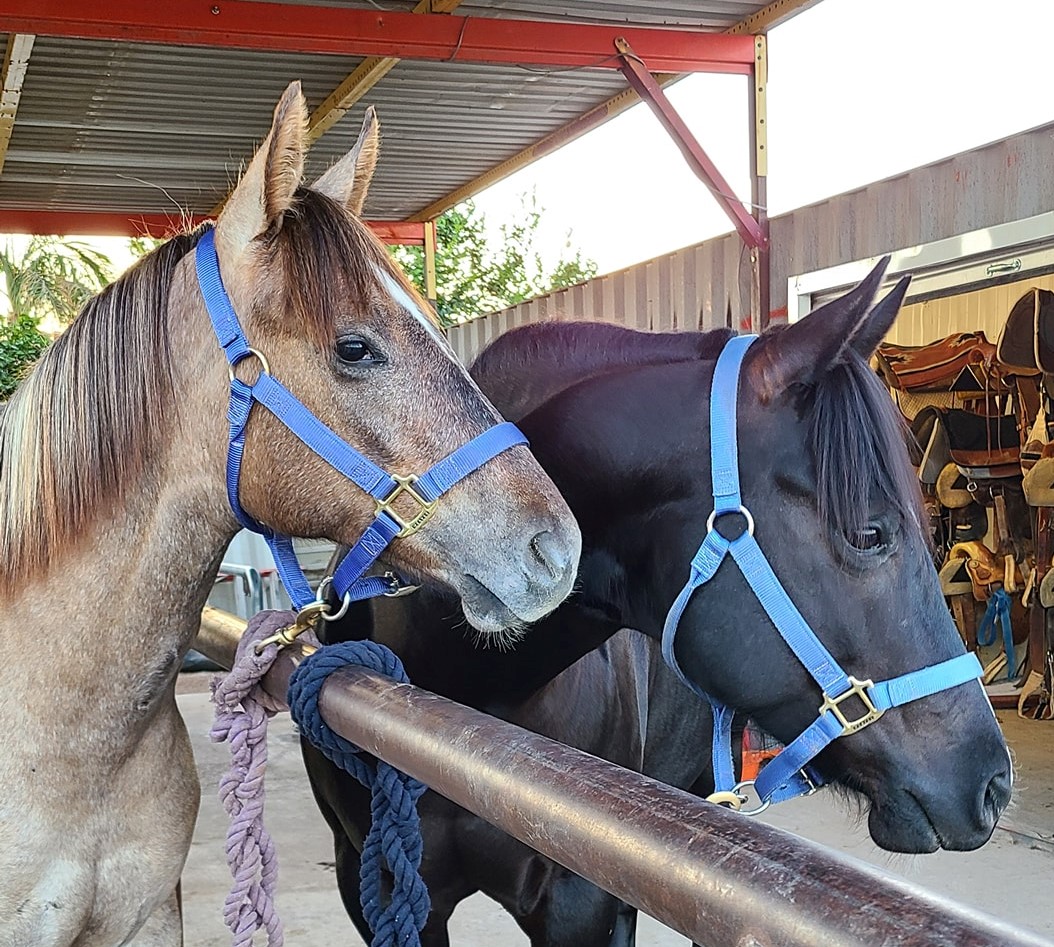 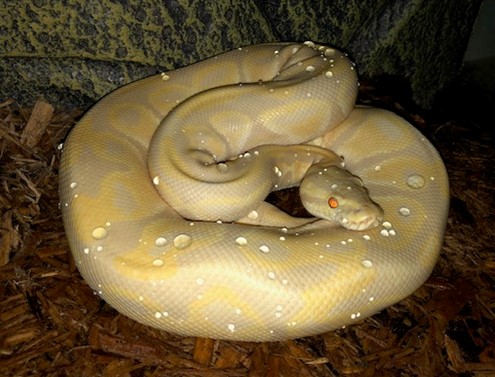 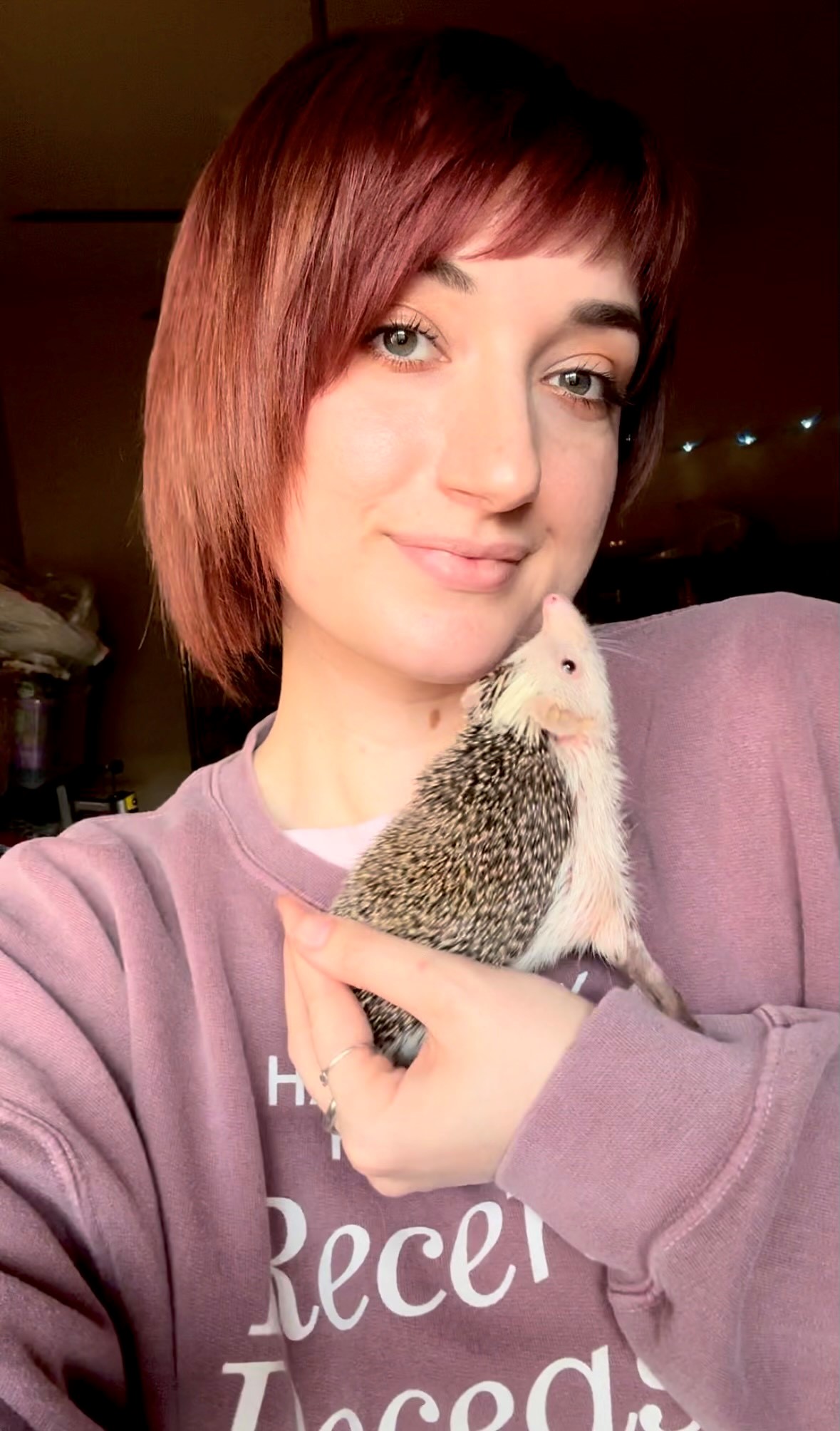 Kelly has always had a strong passion for animals since she was little. She first started her veterinary career in 2014 and has since gained a lot of customer service experience in both general practice and emergency. In 2017, Kelly went back to school to get her Cosmetology license and worked as a hairdresser for three years. While doing so, she sorely missed the veterinary field and in 2021, went back to working in an emergency setting with the excitement of seeing ferrets, rabbits, guinea pigs, and having exotic animals of her own. She fell in love with these small mammals and followed her dream to work at an exotic-exclusive veterinary clinic when she joined the AEAC family. Kelly is very passionate about small mammals and is often found researching the most updated husbandry, nutrition, and behaviors with goals of opening a small business to sell various homemade small animal items, treats, and grooming services. Kelly lives with a sassy hedgehog named Gilly, a horde of six degus, as well as two dogs and a cat. In her free time, you can find her thrifting, sewing various projects for small animals, and spending time with family. 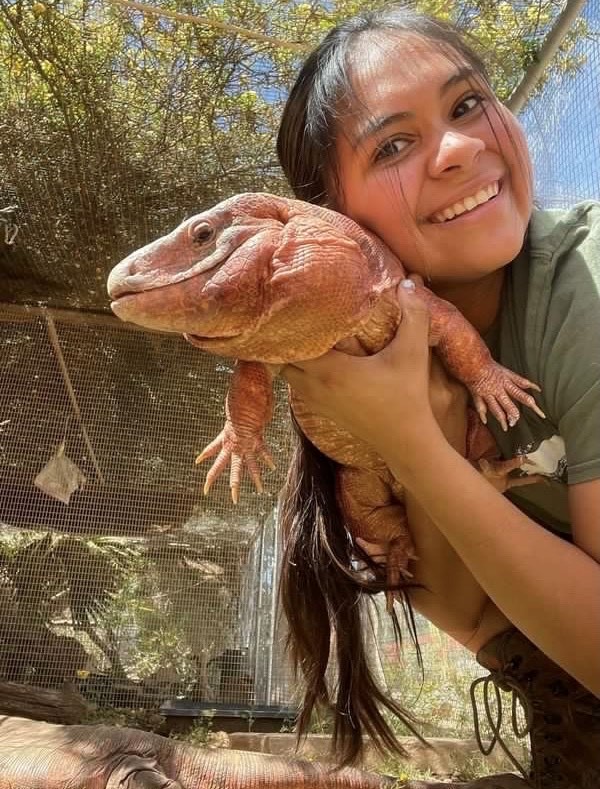 Jasmine was born and raised in Gilbert, AZ for most of her life. She graduated from Perry High School in 2020 and is now studying Biological Sciences (Pre-Veterinary Medicine) at Arizona State University. Jasmine has one dog, two cats, a desert tortoise, crested gecko, peter's banded skink, and a Mexican black kingsnake. She has always had a passion for animals, and her ultimate career goal is to become an exotic animal veterinarian. Since her senior year of high school, Jasmine has enjoyed working hands-on and learning more about reptiles, so much so that she got a tattoo of her favorite animal - the African dwarf crocodile. 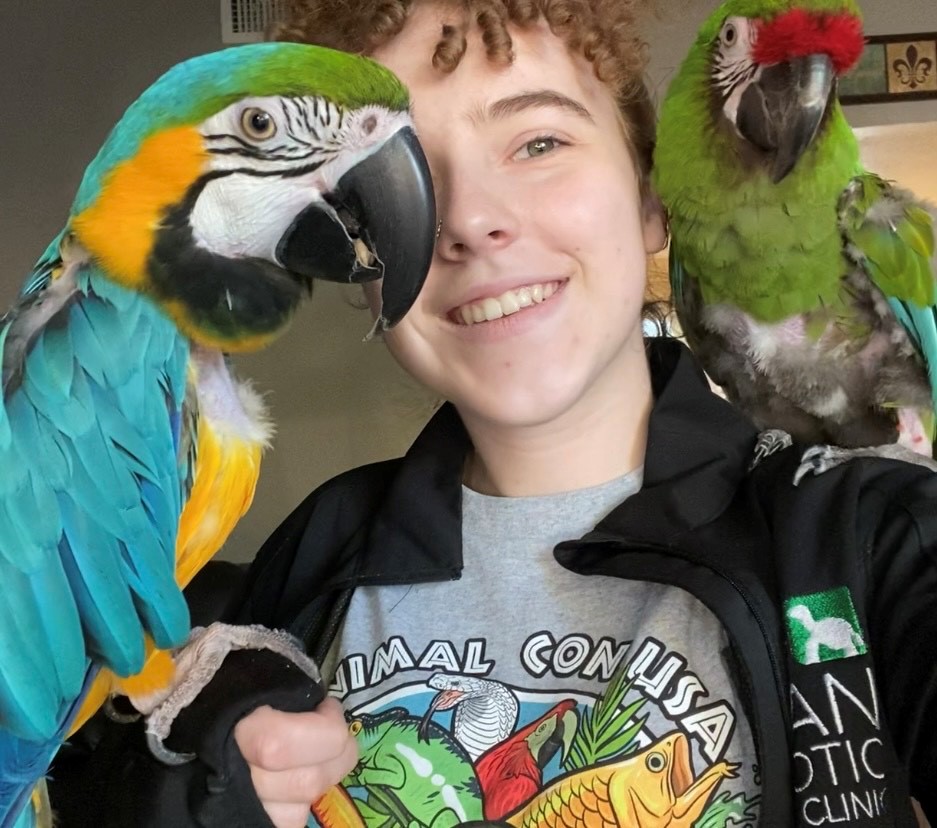 Emma is an Arizona native studying Applied Biological Sciences (Pre-Veterinary Medicine) at Arizona State University. She lives in Chandler with her military macaw, blue and gold macaw, African grey, and two green cheek conures, as well as a Burmese python named Smudge. Emma holds a strong interest in genetics and zoological medicine and wants to someday open her own mobile-euthanasia practice where she can further her passion for compassionate end-of-life pet care. In her free time, she can be found hiking, creating taxidermy, and researching the latest findings in exotic pet husbandry. Her beloved military macaw Harley, who is battling avian bornavirus, is a pet ambassador for ASU's College of Integrative Sciences. 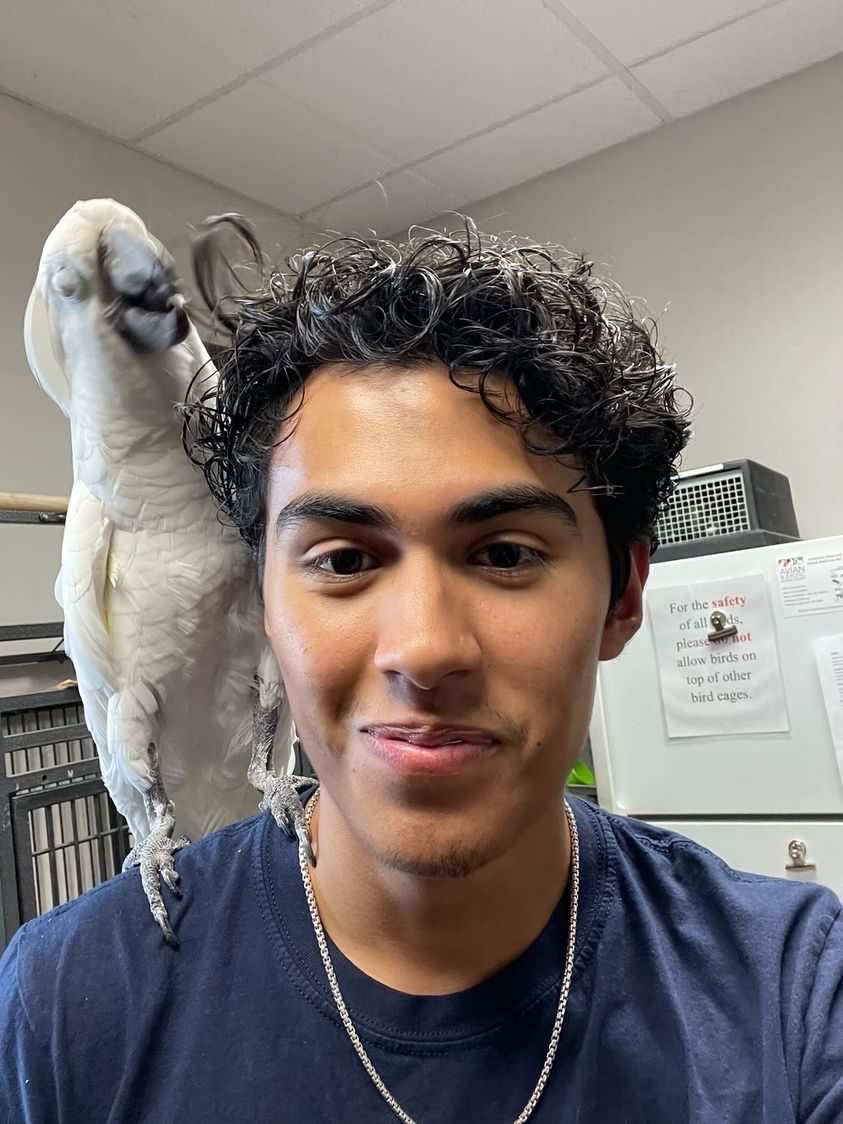 Isaiah was born in Mesa AZ and grew up in the East Valley. He graduated from Combs High School in 2020, and now majors in Biological Sciences (Pre-Veterinary Medicine) at Arizona State University. At home, Isaiah has many pets including his dog, chahoua gecko, gargoyle gecko, crested gecko, and sulcata tortoise. He plans to go to vet school and his ultimate career goal is to become an exotic animal veterinarian. 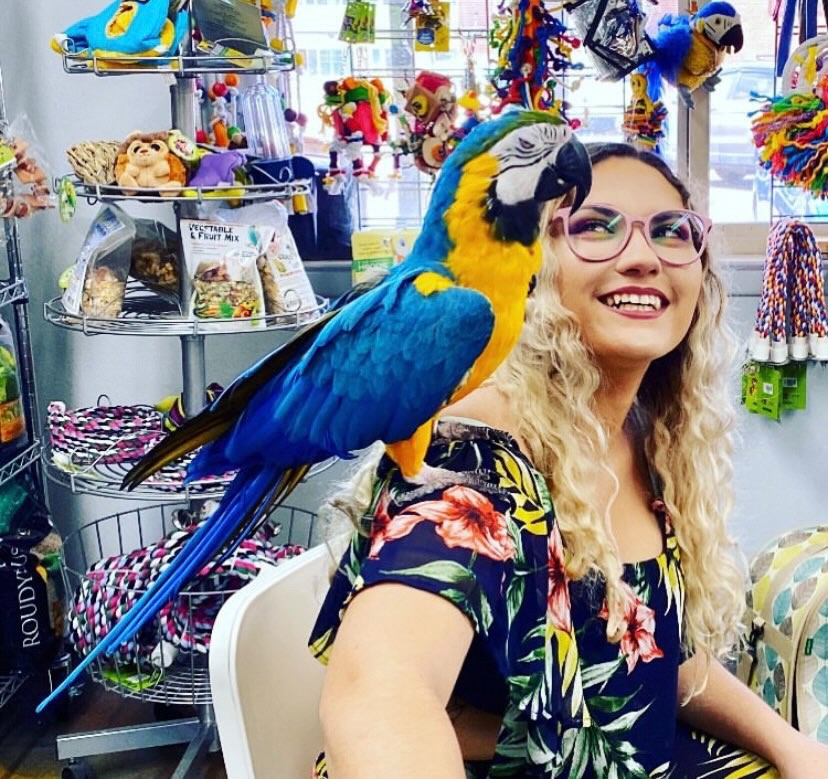 From a young age, Leah has always had a passion for animals and nature, be it catching lizards and snakes, or watching birds from afar. She is currently enrolled at Arizona State University pursuing her degree in Biological Sciences & Natural Resource Ecology, as well as a certification in Wildlife Management. Leah's ultimate career goal is to become a zoologist and conservationist. She cares for all types of species and makes a point to ensure that no matter what, they are experiencing utmost care and comfort. 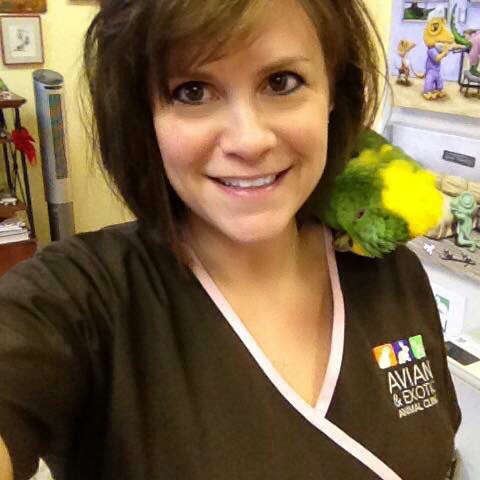 Sandi Orenstein grew up in Connecticut and earned a Bachelor’s Degree in Psychology from Quinnipiac College. Sandi’s professional career moved her to Massachusetts, where she served as the Senior Development Director for an international non-profit organization doing Major Gifts Fundraising and Event Planning. After relocating to Arizona in 2001, Sandi left the business world to pursue her interest in caring for animals. She worked for the Arizona Humane Society and volunteered for several local animal rescue groups. In addition to spending her days here at AEAC, Sandi volunteers for a local non-profit and serves on their Board of Directors as well. Sandi also trains in the martial arts and teaches Tang Soo Do on the weekends. Sandi lives in Chandler, where she now resides with her husband and their two children. Sandi has always had a houseful of cats and dogs however spending her days at an exotic animal clinic has had its influence - the human to reptile ratio at her house is now 4/3 with their three ball pythons, Limoncello, Marshmellow, and Hunter. Their newest addition in 2022 is Bailey, a Bernese Mountain Dog that was rescued as one of a group of 80 breeding females that were sprung from a puppy mill that was being shut down. Our growing Exotic Animal Practice is in search of an Experienced Veterinary Technician. We are a strong and growing three-doctor practice. We are the first and oldest exotic pet exclusive practice in Arizona! We are looking for a Veterinary Technician who has exotics medicine and surgery experience. This is not an entry level position. The ideal candidate will also have experience in radiology including digital x ray, CT scan, flouroscopy, and ultrasound. Preferred 2 + years experience as a veterinary technician in a predominantly exotics practice. Willing to accept applicants with limited exotics experience if it is replaced with 5 + years as a veterinary technician in a high volume clinic/hospital and also possess a strong passion for exotics. Please email your resume and cover letter to Sandi at officemanager@aeacarizona.com  Seeking a full-time employee however, part-time applicants will be considered as well.